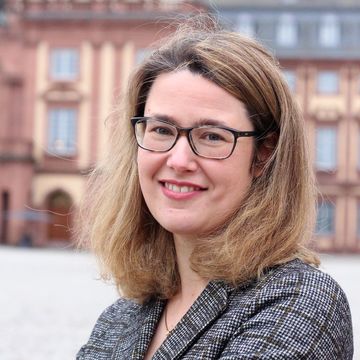 Christine Schwanecke is Junior Professor for the Study of British Literature and Culture. She studied English, German and History in Heidelberg and London (degree: First State Exam; with distinction). She earned her PhD from the University of Heidelberg in 2012 (summa cum laude). Her thesis on “Intermedial Storytelling: Thematisation, Imitation, and Incorporation of Photography in English and American Narrative Fiction at the Turn of the 21st Century” was sponsored by the German Academic Scholarship Foundation and won an award in 2013. In 2018, she completed her second monograph, “A Narratology and Transgeneric History of Drama: The Cultural Dynamics and Performative Power of Dramatic Narration and Narrative in British Plays from the Renaissance to the Twenty-First Century”, which is currently under review at the University of Giessen.

In her research, she focuses on British drama from the early modern period to the present, the English and contemporary American novel, gender studies,intermediality (esp. literature/photography, literature/film, and literature in the digital age), literature and genre theory as well as narratology. Christine’s teaching is transgeneric in character and geared towards the consideration of cultural issues. She is intent on synchronising her teaching with her current research, to which seminars such as “Popular Media and the Contemporary English Novel” (summer 2016; ‘research-based learning’ seminar; resulted in a student conference) or “The Female Hero: Women in Men’s Shoes in British Drama, Fiction, and Film” (summer 2018) bear witness.